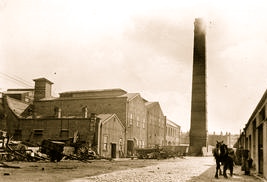 A sense of heritage

The Kiwa production house, at Victoria Park Market in Auckland, has an interesting history. The brick-clad complex with its iconic 38 metre chimney was originally built nearly 100 years ago to collect and burn the city’s rubbish, and was named (terrifyingly) the Auckland City Destructor. Auckland expanded, and the complex grew with it. First a generator was built on the premises to use the burner’s heat to generate electricity for the growing city. Then double-story stables were built to house the 94 horses that hauled the city’s rubbish. Buildings were constructed to house city council staff.

By the early 1980s, Auckland had outgrown the depot, and it fell into disuse. Auckland City Council, as it often did in those days, decided to demolish the buildings, but was met with massive public backlash. The buildings had become such a cultural symbol that nobody could bear to see it lost. Now, after millions of dollars in renovations, the complex is a vibrant centre of trade and commerce. Our studio is housed in a gorgeous converted stable onsite.

Stories like this are engrossing to almost everybody, because this sense of heritage seems to be so deeply engrained in our DNA that it transcends time and place. Being surrounded by all this cultural heritage inspires us to come to work every day and help tell these types of stories to as many people as we can.